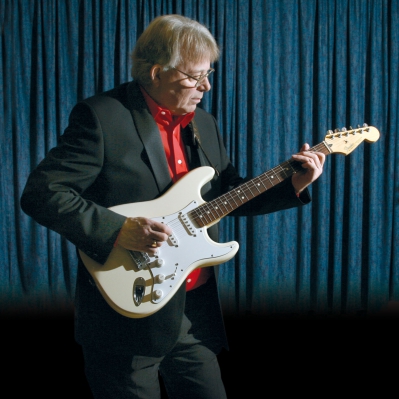 When I was nine years of age, my mother bought me a Martini Colette guitar, brand new, in a box costing £8. I sat in front of the TV every Tuesday evening, waiting for BERT WEEDON to show me how to play this instrument of mine, using his famous 'PLAY IN A DAY' guitar tuition method. The programme was ‘Tuesday Rendezvous’. Bert and his lovely wife Maggie have become great friends since those days. I was too poor to own a set of pitch pipes to tune the guitar, we used the old method of picking up the phone, as the dialing tone was the ‘G’ note for the third string. Once you had got the third string in tune, it was easy to tune the rest of the strings.

After becoming kind of proficient, well I could play half a dozen chords, I had some first hand experience in a band called 'THE BOYS'. We did a religious show called ‘SUNDAY BREAK’ playing some of Cliff’s songs and making them work to a selection of Hymns. But, we did not expect it to rain. We were out doors doing this programme, and unfortunately my amp blew up as it got soaked. Then I played at the open air theatre on the Great Orme in Llandudno in North Wales. A talent show in the open air. I had a welsh singer with a really hard accent and it just didn’t work with Roy Orbison’s ‘Blue Bayou’. I joined two different bands 'MIKE & THE INVADERS ' and 'PETER GRAHAM & THE GAZELLES'. We named the group after The Gazelle – the pub we were drinking in at the time in Anglesey. We made a single record which was STILL WATERS RUN DEEP / BEAUTIFUL DREAMER. Unfortunately I still have a copy!

We used to play at the end of the pier shows that were twice nightly on Saturdays. One time we performed with HEINZ, as his backing band didn’t turn up, then the same thing happened with the KALIN TWINS. A great experience for us to meet and work with these icons of the day. I think it
was Rhyl Pier Pavillion, and if I remember, Heinz wore a white Jacket. A great reception from the crowd. He was top of the bill and a fabulous performance.

I was then fortunate in 1962 to see Billy Fury with the Tornados at the Odeon in Llandudno. What a bill, what a night. It was just fantastic and it only seems like yesterday. I have been a fan of Billy’s ever since.

During this time I listened to RADIO LUXEMBOURG and RADIO CAROLINE, listening to the new sounds coming from THE SHADOWS. I wanted that sound, badly! I gave up playing for some years after this because of the day job, and then the 'Bug' came back, after meeting a local song-writer in Milton Keynes - ALAN RONDEAU. Learning his material, climbing up into his loft to record his songs, Shadows style, on his 4 track recorder, which got me into this business all over again. Then, after meeting BIG GEORGE – a Presenter on BBC Three Counties Radio, who one day in the Post Office in Stony Stratford, said that I should get back out there gigging, and together we decided with JOE PRICE, a 'wee Scot' from Wolverton, who, on stage, has got more front than Sainsbury’s, to give it a go. BIG GEORGE has a way with words, and duly instructed, we formed the Duo - 'COOL SHADOW'. We worked clubs all over the place, and have been incredibly successful over the past few years doing 60’s stuff and The Shadows instrumentals.

Following this, it was now time to record my first guitar instrumental CD. Thanks to GEOFFREY STRACHEN, who re-programmed the Zoom 508 Delay Pedal, I was able to get the true sound of THE SHADOWS, so I could then start recording again. The first CD was called MEMORIES. For some reason THE FIELDS OF ATHENRY has become part of my life. I am always asked to play it, everywhere I perform, a great Irish tune, with a strong melody line.

The second CD came about as a challenge from the guys in the pub. Each Sunday, someone would suggest a track. I would go and learn it and record
it during the week, taking the finished track back to the pub the following Sunday. That is why my second CD is called SUNDAY NIGHT INN.

My third CD came as a wonderful surprise. I had been talking to Todd Slaughter – a great guy who runs The Official Elvis Presley Fan Club. I had discussed the idea of doing an instrumental CD of Elvis’ songs. So I sent him a copy of my version of ‘Can’t Help Falling In Love’ and he loved it. Then, on Christmas Eve, I had a Christmas card from Todd saying lets do the CD. You can imagine how thrilled I was to be asked to do this tribute to Elvis. The CD is called SENTIMENTAL ME – INSTRUMENTALLY ELVIS.

Then came along Chris Eley – Head of The Sound of Fury – The Official Billy Fury Fan Club. After some discussions, we agreed that I should do a tribute for them to Billy. This was a great success and very enjoyable to do, as Billy was always my hero. The CD is called BILLY FURY – ALWAYS REMEMBERED.

Following the success of this CD, Chris then asked me to do a second tribute. BILLY FURY – ALWAYS REMEMBERED Volume 2.

During the day I teach guitar and how to read music as a full time job, working from 9.00am through to 8.00pm each day, and Saturday mornings.

Whilst I was recording the second Billy Fury Tribute CD, I was asked to go on Radio Caroline on Dell Richardson’s ‘GOOD ROCKIN’ TONIGHT SHOW. I was thrilled to bits, because Radio Caroline has been THE influence on music radio in this country. Every government tried to ban this radio station, but they won through and are still going strong, based at the Maidstone TV studios, available on the Internet and SKY TV. When I did this show, Steve Etherington who manages John Leyton was listening. After a discussion we agreed that I would do an instrumental tribute to John Leyton. John is on the cover with me, and if you look closely you can see we are in ‘Stitches’. The reason was, just at that moment an old war time plane was struggling to fly over us and I started humming the theme to The Great Escape, which of course was one of John’s films. I then recorded my tribute CD to John – JOHNNY REMEMBER ME.

Finally, to bring this up to date, I have just recorded and released LONE RIDER – GREAT TV & MOVIE WESTERN THEMES, which I am really very proud of. I have had tremendous help from DOUG ABBOTT in the US who has written the Liner Notes for me and selected the track listing. Doug is a western collector, and a very knowledgeable person on this genre, with a web site full of fantastic pictures for sale. Doug along with RONALD JACKSON will publish a great new western book in the Spring – ’50 YEARS OF THE TELEVISION WESTERN’. I have also had fantastic help from SANDRA MARTINEZ also in the US, selling my CD and making it available at the many western conventions. Sandra gets autographs of the stars at these shows for people. Contact details for both Doug and Sandra are in the Liner Notes of my western CD.

That about brings things up to date, I’m currently working on a Christmas album - INSTRUMENTALLY CHRISTMAS which should be released September / October 2008. Following this CD I am working on two projects. These are IN A ROMANTIC MOOD, concentrating on the slow ballads and another tribute CD - GONE,BUT NOT FORGOTTEN a tribute to 3 of the finest singers we have ever had. DEL SHANNON, GENE PITNEY and ROY ORBISON.