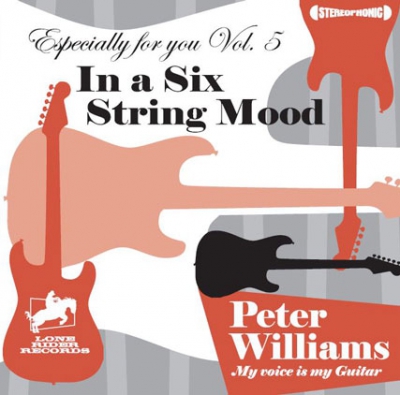 Especially for you Vol. 5 - In a Six String Mood CD

ESPECIALLY FOR YOU VOL 5:
IN A SIX STRING MOOD

This collection of 20 recordings you hold in your hands does not have a book-ending theme, IN A SIX STRING MOOD is a collection of titles jotted down on post-it notes and scribbled in the diary, the veritable ‘to-do’ list and now ‘done’, but is it? There are always songs to record and long-lasting melodies are always heard on the radio and in venues all the time so expect more to add to this very special collection. Some titles here are also from requests received and after careful consideration and trimming down a list of over a hundred titles this is the result. A very personal album not only Peter Williams plays on guitar, but what you asked for and Peter purposely set out to record some versions of these classic songs that were perhaps not always the best known versions, but those that followed the melody line and enabled him to let his guitar be the very lyrics on your lips, hence as Peter says – ‘MY VOICE IS MY GUITAR’

“Kon-Tiki” opens the set and was a 1961 British number one instrumental hit for The Shadows, composed by Michael Carr who had been writing songs since the early 1930’s.
In 1983 the one-hit-wonder group from Scotland Fiction Factory had a huge European hit with “Feels Like Heaven” which could have been written for the guitar, check out the middle-8 bars in particular, it’s a well-constructed pop song and lends itself perfectly to the fine string arrangement here.

The majority of good compositions over the last 75 plus years have been put together by writers with either a good classical music education or at least a knowledge of how to carefully construct chords and the rest of this CD contains such, from the classic Scott McKenzie 1967 hit “San Francisco” (not to be confused with the Tony Bennett hit from 1962) via Charlie Landsborough’s version of the 1957 Johnny Mathis hit the “Twelfth Of Never”, a slice or two of Country music, the essence of many a pop song mid 60’s in John Denver’s “Country Roads”.
Mid set, and by complete contrast to what lay before, a cover of Eden Kane’s “Get Lost” (Eden’s second top 10 British hit in 1961), a personal favourite and never heard before as an instrumental.

These are classic titles throughout, all played on Peter’s Fender Stratocaster. Using the very finest of strings, Fender nines (.009 - .040).

Tipping his hat to legendary performers such as American’s Andy Williams, and Neil Sedaka Peter gives Sedaka’s song “Solitaire” a rare instrumental outing, based on Williams’ fine 1973 recording.
“What Now My Love” a French song by Gilbert Becaud and Pierre Delanoe (“Et Maintenant”) has to date over 200 versions registered as recorded with the Performing Rights Society since its initial publication in 1961 and for many years was a powerhouse ballad performed by Shirley Bassey and stalwarts of the cabaret scene worldwide, Frank Sinatra gave it a Swing treatment in his shows and the arrangement you are listening to here is sculpted from Elvis Presley’s 1973 recording when he successfully performed the song on his “Aloha From Hawaii” satellite TV show.

Listening to Peter’s version of the Nat King Cole treatment of Frederick Loewe and Alan Jay Lerner’s “On The Street Where You Live” (From their 1956 Broadway musical “My Fair Lady”) I am reminded of the innocence of the lyric “Are there lilac trees in the heart of town, can you hear a lark in any other part of town”, pure poetry and so evident on this arrangement, you can hear the lyric in your mind as the strings gently play the melody.

When you get a chance have a listen to Nat King Cole’s original version of the classic 1952 song (1957 hit) “When I Fall In Love”, play the stereo version and let the strings wash over you, then go watch the 1993 Tom Hanks film “Sleepless In Seattle “and this classic title will have you ensconced.
There’s a lot of emotion, turn down the lights, turn up the volume, let the guitar wash over you as you then sing the song softly to yourself.

Frankie Laine’s “Answer Me”, originally a German song has quite a chequered history, Laine’s arrangement you have here without a vocal covers the storms of its past when the BBC originally banned it in 1952 for its religious references and is said by some to have been a big inspiration behind Lennon and McCartney’s 1965 song “Yesterday”.
A Bob Crewe/Bob Gaudio song originally written for Frankie Valli when he first went solo from his group The Four Seasons in 1967 has been covered by so many artists and with the worldwide success in the last five years of the Jersey Boys musical, add to that Valli re-kindling past glories with a new line-up of ‘Four Seasons’, “Can’t Take My Eyes Off You” is the ear-worm of ear-worms, a never ending song that’ll keep you whistling and humming all day as the strings play out, you’ll want to hit ‘repeat’. Peter also picked up on “May Each Day” a classic rarely heard song by anyone else with which Andy Williams would usually close his regular weekly television show, this closes Peter’s CD perfectly too.
©Graham Hunter 2017.

“The third pick-up setting was used for most of the tracks. Recorded and mixed using Yamaha mixing desks. FX (effects) are from the old Zoom 508 pedal through an Ibanez Virtual Fender Twin Stack amplifier. I prefer the ‘Warmth’ of this older gear than the new ‘Crisp’ sounds that are available. My perfect sound would be that fabulous feeling we had from the old radiogram like the Dynatron. It sounded like Sunday lunch was cooking. Basically a sideboard with a speaker at either end. The one thing I am absolutely determined to do is to get as much emotion out of every song I cover as is possible. People tell me I can play ‘Sad’ really well. That to me is a compliment. I listen to a lot of music and there is a vast difference between a ‘Note player’ to a ‘Musician’. It’s the same in song. A vocalist has to tell a story set to music. The finest example is probably Frank Sinatra”