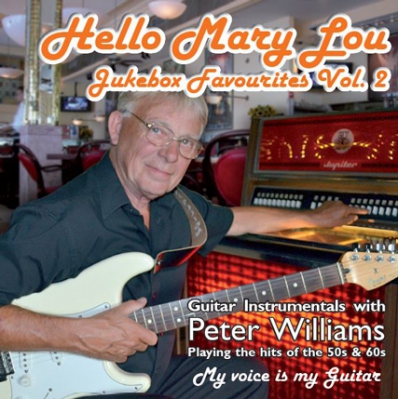 Hello everyone and welcome to my latest CD - HELLO MARY LOU - JUKEBOX FAVOURITES Vol 2. The opening track YOUNG GIRL which was written by Jerry Fuller and released by Gary Puckett and The Union Gap in 1968. YOU WERE ON MY MIND by Crispian St. Peters. There are three Gene Pitney tracks on this CD. These are BLUE ANGEL written by Roger Cook and reached number 39 in the Uk charts in 1974. I’M GONNA BE STRONG – first recorded by Frankie Laine in 1963, but the song did not become a major hit until Gene Pitney’s recording of it in 1964. The title track of this album - HELLO MARY LOU gave Rick Nelson a big hit with this song in 1961 which I have previously recorded Rick’s version on my CD ‘ESPECIALLY FOR YOU - FROM THE VAULTS. Gene Pitney released a version of his own song in 1962. I have also covered 3 of Glen Campbell’s songs. On this CD are REASON TO BELIEVE - Glen Campbell recorded it for his 1968 album Wichita Lineman.TRY A LITTLE KINDNESS - first recorded by Glen Campbell in 1969, and the wonderful Jimmy Webb song GALVESTON, also released in 1969. Recently, I heard a great Don Gibson song - WOMAN, SENSUOUS WOMAN. This was his final number one single in the US country charts. This is the first time I have ever recorded a Kink’s song, and I chose their 1966 hit SUNNY AFTERNOON after I had watched a documentary on Ray Davies. JULIET by The Four Pennies was always a favourite of mine. Close harmony like The Everlys always gets to me. Similarly, TO KNOW HIM IS TO LOVE HIM by Peter & Gordon and written by Phil Spector back in 1958 when The Teddy Bears recorded it. STRANGER ON THE SHORE - a piece for clarinet, written and recorded by Acker Bilk. Released on Columbia Records in 1961. The record was the biggest selling single in the UK in 1962. A LITTLE BIT MORE written by Bobby Gosh in 1973 and released in 1976 by Dr Hook and The Medicine Show. RELEASE ME was written by Eddie Miller back in the year I was born - 1946. Englebert Humperdink held it in the charts at number one for 6 weeks in 1967, preventing The Beatles single PENNY LANE / STRAWBERRY FIELDS FOREVER from reaching the top spot. RELEASE ME was the biggest selling single in 1967. I’M LOSING YOU recently recorded by Paul Carrack was a big song for Brenda Lee under the shorter title LOSING YOU on her Let Me Sing album in 1963. In 1968 came Solomon King with his fantastic song SHE WEARS MY RING. I LOVE YOU by Cliff & The Shadows and written by Bruce Welch, released in 1960. SILENCE IS GOLDEN by The Tremeloes in 1974 was written and recorded by THE FOUR SEASONS Finally, two songs from BILLY J. KRAMER – Bad To Me, 1964, and in 1963 the John Lennon song - Do You Want To Know A Secret. I hope you enjoy my latest CD.
Peter Williams
© 2015