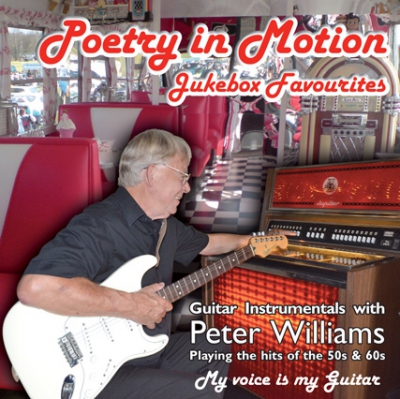 If you think that today’s pop music all sounds the same, it’s not because you’re older or out of touch. It has now been scientifically proven that today’s music is for a fact less varied. A research reported in Scientific Reports analysed a data base of a million songs recorded between 1955 and 2010 and found ‘Numerical indicators that the diversity of transition between note combinations…has constantly diminished’. Put another way, this means the chord changes and melodies of different songs are more alike than they once were. Moreover, louder – which is no news to us – presumably to compensate for the musical sameness.
There can be no more striking example of the varied melody and mood of the golden age of pop music than in Peter Williams’ set of ‘Poetry In Motion’. ‘Poetry In Motion’ indeed! And in Peter we can find no better and more sensitive interpreter of these tunes.
All are personal favourites of the man as evidenced by his warm and individualistic treatment of each tune, breathing new life into these old friends. He opens with a trio of tunes which encapsulate the peak of teenage musicality in 1959 / 60, before giving us his wonderful treatment of ‘Foot Tapper’. As most of us know, few can capture The Shadows magic like Peter Williams. He then treats us to a punchy version of Johnny Cash’s ‘Ring Of Fire’, whilst ‘More Than I Can Say’ sounds like it was especially written for him, so perfectly suited it is to the Williams style. His version of Bobby Goldsboro’s hit is both dreamy and magical and for my money the best version I’ve ever heard of it – and all without the words! But then ‘My Voice Is My Guitar’ is the man’s motto!
He gives ‘Silhouettes’ a chirpy original treatment, followed by a string of tunes that sound so much better for having passed through Peter’s hands. ‘Don’t Let The Sun Catch You Crying’ sounds like another number that could have been specifically written for our man; certainly no-one has ever turned out a lovelier and more tender version of that song. The Cliff Richard number that follows is a bright pick-me-up, whilst the mood is tender again for Billy Fury’s ‘Wedding Bells’. The next four tracks are again innovative versions of songs much loved by many, preceding one of the album’s highlights, the beautiful and touching ‘I Started A Joke’.
As if twenty-three tracks were not enough, we are then treated to another two tunes, post-Sixties, before he closes with a taster of his eagerly anticipated Big O project. Roy Orbison was an artist Peter Williams was destined to play.
What a truly enjoyable and varied album this is. Lets hope he can treat us to many more.