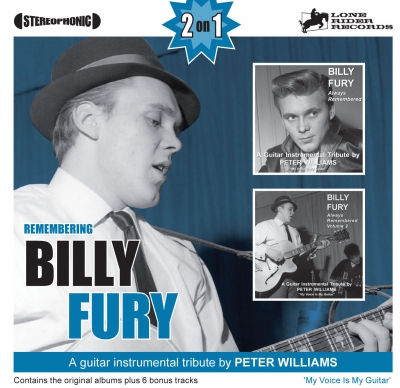 Hello Everybody,
It was suggested to me that it would be a good idea to digitally re-master my Billy Fury tracks and release them all on one CD. This sounded good to me but I wanted to give the album additional value, so I have included 6 bonus tracks to make a 32 track CD lasting almost 80 minutes, giving real value for money, and a celebration of our very first rock star in the UK. I have to thank Chris Eley from ‘The Sound Of Fury’ fan club for his help and enthusiasm for this CD. Chris’ contribution is invaluable in creating this nostalgic booklet with some wonderful photographs of Billy. OK, so why Billy? What is this fascination with Billy? If I can take you back to 1962 I had been given tickets to see Billy perform at the Odeon in Llandudno in North Wales, which was close to where I lived in Colwyn Bay. Well, I was completely knocked out by his performance. I instantly became a fan. I have never heard a chant like it from the audience. They were all screaming ‘We want Billy’, over, and over again. After this incredible experience, I was always at the local record shop with my six shillings and four pence when each new Billy Fury disc was released. I just loved those ‘B’ sides. What was really great was the lead singer in our band was able to do a good impersonation of Billy, which meant of course we were able to play some of Billy’s songs in our set. The next problem was to get the hair right. Billy looked so fantastic with his hair style, very similar to Edd Byrnes who played Kookie on ’77 Sunset Strip’. In those days the barbers used to have something that looked like a form of white glue to plaster over your head so that you could create that special quiff that Billy had, and it used to set really hard. The best way to explain it is when the early Chinese restaurants used to serve a 3 course lunch, and if you remember their thick white soup which it was for every flavour, then you have got it in one. Back to Billy’s songs. I am an emotional musician which make Billy’s ballads perfect for me to play. I love the sad songs and I try to put that emotional quality in my playing. Steve Etherington – John Leyton’s manager, coined the phrase ‘My Voice Is My Guitar’, which has since become my strap – line, the reason being I play the melody on each of my tracks, which in turn replaces the vocal. So may I suggest in Billy’s words ‘Stick Around’, look at those ‘Magic Eyes’, he gave you ‘Once Upon A Dream’, and don’t get ‘Sleepless Nights’ but please, ‘Give Me Your Word’ and never ‘Forget Him’.

Billy Fury-A Lifetime Thing
As a child growing up in the Cornish countryside life had so much to offer in the woods, fields, farms and cliffs and cowboy and war heroes were the order of the day, whilst from the accumulator wireless songs like Tom Dooley and Little White Bull made little impact. Battler Britain, JT Slade, Kit Carson, Buck Jones, Matt Braddock VC and others from the Wizard, Rover, Hotspur and Adventure etc. then Biggles books all filled the imaginary world of a lonely and terribly insecure only child possessed with immense imagination. Soon, with access to friends across the way who had generators on the farm to power a T.V., Cheyenne Bodie (Clint Walker) loomed impossibly large, in all respects, and became the premier idol. He is still very much one. A glimpse of 6.5 Special had done absolutely nothing to change things but sometime in 1961 the records Halfway To Paradise and Can’t Help Falling In Love, probably from ‘Pick of the Pops’ made an impact. Billy and Elvis, inextricably linked in my life, would both become a life-long thing, with Dion, Marty Wilde, Del Shannon, Roy Orbison, Gene Pitney, Gene Vincent, Jerry Lee Lewis, the Ronettes and others also helping to fill the void in a lonely soul (Ronnie Spector in a different way it is true!) A little later would come all the others, such as Ricky Nelson and Eddie Cochran.
Sometime in very early 1962 a life - changing event occurred. At my maternal grandfathers house I saw a snippet of All That Jazz. Billy Fury performed “I’d Never Find Another You” in front of a terribly mute audience but the effect was mesmerising. The super cool look, the great hair, the arm movements, an evident vulnerability and that plaintive but unique, electrifying and soulful voice just connected with a boy just turning into a teen and soon, just as in the words of the Bernie Taupin song, “On My Knee in 63’ I was Billy Fury in the mirror.” His songs with their pathos and pain, the longing for love and then lost love in particular, soon took on personal meanings and the lack of self - confidence and crippling self doubt (also a lifetime thing) ensured that the ‘lonely’ persona became even more firmly etched in my psyche. The Sound Of Fury Show on Radio Luxembourg, excursions across the fields every Saturday afternoon to watch the wrestling, Laramie and above all, Thank Your Lucky Stars, meant that every three months or so Billy was to be seen performing both sides of his latest hit. Closing the show and cycling three times to view the Play It Cool movie at St Agnes meant more movements to practice for the dance floor. In 1963 I bought my first record (we still had no electricity); the LP Billy took pride of place on the dressing table until around 1964 when, aged 15, a Dansette appeared to go away with me to the army. An appearance as the vocalist with the Derek Lowe Trio in Perranporth in December 1963 and a failed audition for the local WI Show had put paid to any showbiz dreams and the Army was the second choice because the Royal Marines were not recruiting. Money sent to the Heanor Record Centre soon filled up my Billy and Elvis record collection and Fury Monthlies still arrived by post, alongside the homemade pasties sent from home. In Hong Kong in 1973 the arrival of the soundtrack from That’ll Be The Day prompted the joining of the then fan club in the UK. In 1982 I saw Billy perform (although painfully gaunt he was still great on stage) and met him twice. He was gracious and said “Thanks lah for what you do” (I had done little but sell records for him at one of his gigs and help to publicise his latest records wherever I travelled in the country) but it was nice for him to say it. When we lost him in January of the next year part of my world fell apart-as it did for so many. I had lost the brother I never had. The ache and emptiness within is still there and I would give every bit of my collection just to chat with him for an hour; even more of course for him to be still among us, “Creaking on like an old door” as he once said. When the Fury Sound ceased to operate around 1995-6 it seemed right somehow to become one of the founding members of The Sound of Fury. The Bronze Statue Project work, the CD releases and the magazines, the lifetime collecting of memorabilia; all of this originated from All That Jazz but the determination and indeed the need, to hang on in and keep trying to promote Billy’s wonderful musical legacy really stems from that special second meeting at the Sunnyside in December 1982. Truly, being a Billy Fury fan is a lifetime thing and this has just been my way to repay this great artist for the pleasure he has given to millions over the years.
Chris Eley-The Sound of Fury
All photos copyright ©The Chris Eley Collection.
www.thebillyfuryfanclub.org
email: secretary@thesoundoffury.org
SAE please to:
The Sound Of Fury-Official Billy Fury Club (Est. 1996)
PO Box 1117,Hutton,Preston, PR 2 ODT.

1 Do You Really Love Me Too ? (Fool's Errand) Barkan/Raleigh
2 I Will Dick Glasser
3 Halfway To Paradise Goffin/King
4 Devil Or Angel Carter
5 Cross My Heart Brandon Wiener
6 A Thousand Stars Eugene Pearson
7 Once Upon A Dream Rowe/Paramor
8 I’d Never Find Another You Goffin/King
9 Like I’ve Never Been Gone Hampton/Monte
10 Last Night Was Made For Love Fielding
11 Maybe Tomorrow Fury
12 Forget Him Mark Anthony
13 King For Tonight Shuman/Omas
14 In Thoughts Of You Morrow/Arnold
15 Be Mine Tonight Simmons
16 Because Of Love Batchelor/Roberts
17 Magic Eyes Burton/Bernstien
18 All I Wanna Do Is Cry Battaglia/Brandon
19 Somebody Else’s Girl Montgomery
20 Collette (‘Live’ Duet with David Harman) Fury
21 Stick Around Peacock
22 Halfway To Paradise (Alternative version) Goffin/King
23 A Thousand Stars (‘Live’ duet with David Harman) Eugene Pearson
24 Give Me Your Word Wylie/Taylor
25 I Belong To The Wind Huber/Overs
26 My Christmas Prayer Fury
Bonus Tracks
27 I Must Be Dreaming* Sheeley/King
28 Open Your Arms Mandel/Jacobs
29 Sleepless Nights Ram
30 Lady Milne/Clayton
31 I’m Lost Without You Randazzo/Barbaris
32 It's Only Make Believe* Twitty/Nance
* Previously unreleased