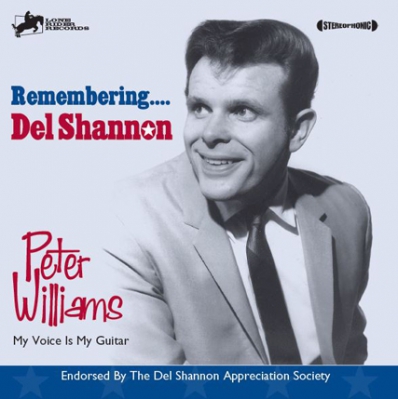 The CD you are holding is the fourth in Peter Williams' 'Remembering' series after covering Billy Fury, Elvis Presley, and Roy Orbison.  Here Williams pays tribute to one of his 60's American pop heroes, Del Shannon.
Coming out of Battle Creek, Michigan, Shannon debuted on the music scene in early 1961 with his monster hit "Runaway" which went straight to the very top of the charts in America and over 20 other countries worldwide.  He was an artist who penned many of his own hits and became one of few singer-songwriters that broke the mold of the Fabian's and other good looking 'Philly' kids that were manufactured and crafted to fit the teen market.  Known for his unique falsetto and often accompanied by his organist's 'musitron' synthesizer, Shannon carved a new sound and sense of style in rock 'n roll that helped bridge the gap between the loss of Buddy Holly (and that sound) in '59, and before the British invasion of '64.
In this tribute, Peter's guitar is his voice, offering some loving and lilting covers from Del's catalogue of both hits and flips.  "Hats Off To Larry" is  given great instrumental treatment here by Williams.  Popular U.K. B-sides like "Jody," "Kelly," and "Broken Promises" are given a new spotlight.  Shannon recorded two Bacharach compositions very early in his career, with "I Wake Up Crying" and "The Answer To Everything."  Although neither of Shannon's Bacharach recordings were released as an A-side, both songs went on to be hits for other artists even though Shannon had recorded them first.
When the British invasion swept the shores of America in '64, Shannon was one of very few American artists to withstand the waive of Brit pop bands that nearly crushed many music careers of American singers.  The Beatles managed to lock up the Top 5 spots on the Billboard charts at one time, pushing the American artists lower on the rung.  Shannon's response was a cover of an old Jimmy Jones hit, "Handy Man" which made #22, and he wrote "I Go To Pieces" for Peter & Gordon which made the Top 10.  Shannon had a good ear and keen sense of the British music from his frequent tours there, and recorded the Lennon/McCartney composition "From Me To You" and released it Stateside before most of America had even heard of the Beatles.  By an unintentional manner, Shannon's recording and release of the Rolling Stones' "Under My Thumb" as an A-side single in '66, became his 'audition' to shortly thereafter working with Stones' producer Andrew Loog Oldham in recording a baroque-laden pop album in 1967 London.  Though Shannon's version of "Thumb" failed to chart nationally, the production and arrangement on that record were very strong, and was a good effort in utilizing one of the Stones' album cuts to push as a single for Del.
Shannon's "Keep Searchin'" kept him in the Top Ten amidst the chart domination of the Beatles, the Stones, the Who, the Searchers, and all of the other self-contained bands that showed American singers how to write their own material, play their own instruments, and recycle old R&B hits and repackage them, sending them back to America as up-tempo chartbusters.  "I'm Gonna Be Strong" was one of those operatic pop-scores that mimicked the style and influence of Roy Orbison a la "Running Scared."  "I'm Gonna Be Strong" had that slow, sad quiet intro, with instrumentation being added slowly to build up upon itself, to bring the listener to the belting, full-of-energy, climatic ending.  Shannon loved that, and it was no wonder he recorded his own version of Gene Pitney's "I'm Gonna Be Strong."  Shannon also recorded the Four Seasons' "Rag Doll" but injected new life into it by making it a more punchier, energetic rocker.  Some music lovers feel Shannon's version of "Rag Doll" eclipses the original.  I guess it's all in who you ask.
Although known for his rock 'n roll, Shannon was a country music lover at heart.  He idolized Buck Owens and George Jones, and Shannon experimented with country music himself, releasing a tribute album to Hank Williams at the peak of his career, and in the 70's releasing self-penned songs like "In My Arms Again" which Shannon felt was another "I Go To Pieces" hit waiting-to-happen.  He later recorded in Nashville with Warner Brothers between 1984 and 1985.  Two singles were released, one charted at #56.
After the death of Roy Orbison in 1988, Shannon was rumored to replace him in the super-group The Traveling Wilburys.  It never came to fruition as Shannon himself died in early 1990.  That being said, Peter Williams delightfully covered a few later favorites such as The Traveling Wilburys' "End of the Line," Tom Petty & The Heartbreakers' "Learning To Fly", Roy Oribson's "In Dreams," Jim Reeves' "I Love You Because," Petula Clark's "Sailor," and Tony Christie's "Avenues and Alleyways."
This tribute by Williams will bring back a lot of memories for you.  It certainly did for me.  Happy listening!
Brian Young
delshannon.com
Del Shannon
Appreciation Society
P.O. Box 44201
Tacoma,
WA  98448-0201
U.S.A.

I first discovered Del Shannon’s music as a 10-year old when a family friend gave me a box full of unwanted records from his garage, they were my first treasures and amongst them, the first time I heard Del Shannon on “Keep Searchin”, I loved it!, it had a driving rhythm, raw production and a whaling vocal with immaculate falsetto, I loved it right to the last note in the fade and double-joy for me because the B side “Broken Promises” was just as good, albeit a slower paced ballad.
By the time I was in my mid teens I had met Del Shannon at the London Palladium when he was opening for Ray Stevens, we chatted for a while backstage and later I would meet his wife Shirley and manager Dan, I kept in touch with everyone and a life long friendship transpired, I was privvy to many shows in the Uk and USA as Del was promoting his “Drop Down And Get Me” album. When Peter Williams told me of his plans to record a tribute guitar instrumental CD to Del I was delighted and listening to the recordings as they were completed just brought back so many fond memories for me of my times spent with Del and his family and the fans I met along the way. I am so pleased Peter has not only highlighted the big hits but covered some of the rarer fans favourites too.  Peter’s guitar strings have certainly paid homage to one of the sixties finest songwriters and  a true original, I am proud to put my name on this album, enjoy the music of Del Shannon!
Graham Hunter
www.grahamhunter.com

'What others are saying about this album'......

"Remembering Del Shannon” arrived in yesterday’s mail….sooner than I had expected.

I gave it a “first listen” on this morning’s commute to work, as there was no time last night. I had just enough time to listen to the entire CD

I believe that you can justly say “Mission accomplished !” It’s a wonderful tribute, and the selection of songs was well thought out.

Despite the strong themes of sadness which characterized most of his songs, his records were so full of energy and passion, and I think you’ve captured that essence very nicely.

Del’s music has been one of the cornerstones of my life for 53+ years, now. I can no more imagine my life without the steadfast presence of his music, than I can imagine it without my parents of friends.

Thank you for so wonderfully honoring my all-time favorite singer-songwriter, and his unique musical legacy. Like his contemporary, Roy Orbison, and all other truly great artists, Del never sounded like anybody except himself. His songs were uniquely his own, just as were those of Roy Orbison, The Beatles and a select few others. And the best of those songs are truly timeless…as fresh and invigorating today, as they were half a century ago.

I don’t know whether these comments may be of any value, from a standpoint of publicizing your work, but please feel free to use them if you would like to. I am DEL-ighted with “Remembering Del Shannon” !

Thanks for sending me your wonderful CD. I have already played it a few times and here is my review:
"He's done it again!

Following on from his tremendous dedications to Elvis, Billy Fury and Roy Orbison, Peter turns his attention to Del Shannon and delivers a dignified, heartfelt,respectful, nay overwhelming, tribute. You can feel the love he has for Del in every note he plays.

I well remember, as a teenager, hearing Del's Runaway for the first time on Radio Luxembourg. It stopped me in my tracks, took my breath away and still does in 2014. What a sound, what a singer, what a song, what a fabulous record. From that moment I bought every one of Del's records as soon as they came out without even hearing them. I knew what magic to expect in those grooves and was never ever disappointed. The B sides of the singles were invariably as good as the A sides. My own favourites of all time are Kelly, Sue's Gotta Be Mine and I Go To Pieces (which was later recorded by Peter And Gordon at the height of the British group era and well worth a listen).

I was later privileged to see Del live in Hamburg and I can honestly say it was the best live show I have ever see. No chat, no corny jokes, just two hours of superb music.

Now Peter Williams has made this great CD which none of Del's fans or 50s and 60s music should be without in their collection. Peter does his unique versions of Del's songs while always acknowledging the great man himself.Del's fans, family and friends can be proud of this wonderful tribute by Peter Williams. His voice is truly his guitar.

What will Peter come up with next? I am constantly surprised by his exquisite taste and choice of material. I am sure his versions of Rick Nelson, Jim Reeves, Fats Domino, The Everly Bothers and The Fleetwoods would be fantastic. They are just waiting for the PW treatment. Take your time, though, Peter. Let us all sit back enjoy this most beautiful Del Shannon album.

Thank you for the music, Peter."