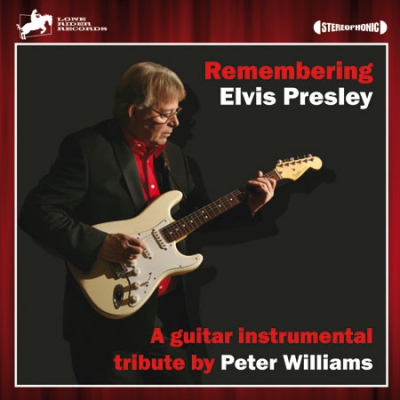 It would be tempting to think that if Hank Marvin were to record a tribute album to Elvis, then this is what it would sound like. But not so. For whilst Marvin is undoubtedly Peter Williams’ biggest influence, Peter is very much his own man, which becomes more apparent with each passing album. One of Peter’s strengths is to take a well known artiste’s repertoire and make it his own, or even more magically, deepening the listener’s love of the original, for he or she may listen to the original in a new light.

I find it remarkable that in this day and age of ten – track albums which take five years to produce that Peter Williams can give us an amazing 26 tracks, whilst sometimes getting out three albums in one year! Yet nothing is rushed, for being the perfectionist that he is, each song is thoroughly experimented with before the hard task of actually laying the track down. He is also remarkable for always striking the right balance, for reinterpreting a well known name’s repertoire is always a hazardous enterprise, not least for imagining what arrangements to give it. Occasionally he will give a tune a dramatic reinterpretation yet remaining true to the spirit of the original, whilst other times he follows the original to the letter altering little or nothing, which for his fans is no problem, for the pleasure is simply hearing this wonderful musician play. (By ‘Original’ I mean the Elvis version, for Elvis often recorded songs associated with others. Peter’s attention is on the way Elvis did them).

I’m sometimes embarrassed when writing about Peter Williams’ music, for I feel in danger of being seen as a sycophant. He always sends me advance copies of his work for my comment, and each and every time I give him the thumbs up. I think there must come a day when I think he’s got it wrong, but after several years it still hasn’t happened; and if it does I might actually feel some relief, for I suspect that somewhere inside of me is lurking an envy of one so disgustingly over – talented! Even if he were to get it wrong the public would never hear it, for being the unassuming man and careful listener that he is, he would probably go back to the drawing board and start all over again.

The emphasis of this album is the romantic balladry of Elvis, so suited to Peter Williams. It gets under way with dreamy mood – making versions of ‘Love Me’ and ‘Loving You’, whilst his reading of ‘It’s Now Or Never’ is bright and melodic. I have always thought of ‘Wild In The Country’ as one of Elvis’ most beautiful recordings and Peter here pulls off the almost impossible task of instrumentally duplicating that superlative performance. I can think of only one word to sum up his version of ‘Can’t Help Falling In Love’: gorgeous. He sticks closely to the originals with ‘Good Luck Charm’ and ‘She’s Not You’, for the charm of these is very much in the strolling Nashville rhythm so popular in the early ‘60s (Another good example of which is Leroy Van Dyke’s ‘Walk On By’).

‘Suspicion’ oozes charm with its beat and our man’s flawless reading of the melody, whilst his instrumentation of ‘Never Ending’ emphasizes the melody in a way no vocal could. ‘There’s Always Me’ is dreamy and voluptuous, whilst Dean Clout’s piano adds to the impact of ‘Memories’. ‘Let It Be Me’ is wonderful by whoever does it, and I’m certainly glad that Peter has. ‘I’ve Lost You’ is both magical and moving.

Dean Clout’s lovely intro sets the tone for a majestic rendering of ‘Bridge Over Troubled Water’, surely a hit single waiting to happen for any major label with imagination enough to sign this man. He never shirks a challenge, for how many guitarists would have elected to play ‘Rags To Riches’ over easier alternatives? ‘It’s A Matter Of Time’ is a charming track, and Dean reappears to add magic to ‘Help Me’.

The set closes with flawless and powerful renditions of ‘Why Me, Lord?’ and ‘My Boy’, concluding my commentary on a selection of the tracks here, though I find it an unalloyed pleasure from start to finish.

Over the decades there has been every kind of tribute to the twentieth century’s greatest pop singer, but few can match the taste and originality of this one.
© James F. Cullinan
www.finbarrmusicdirect.com