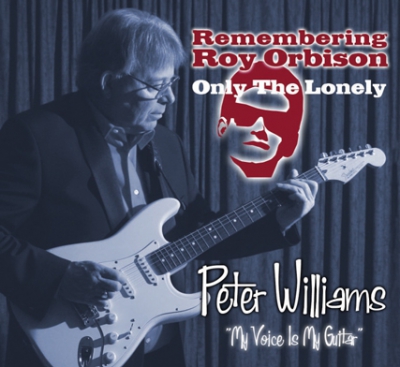 This is my third CD in the ‘Remembering’ series after covering Billy Fury and Elvis Presley. There are 22 tracks which include 6 bonus tracks.
Recording this tribute to Roy Orbison has given me a great deal of pleasure. The songs that I have covered are both a personal choice and those I could not possibly leave out. I have done my best to get the ‘Right Feel’ to these important songs, which is why it has taken some considerable time to complete this CD. Some songs I have taken up to a month to complete until I was happy that the song is as close as I can get to Roy’s incredible performance. If you take ‘Walk On’ as an example. A video exists which shows Roy standing there and singing this song apparently effortlessly. He didn’t have to move or throw his arms about. His talent was such that all we needed was to hear that amazing voice. Nothing else about his performance was more important. My most watched music DVD is Roy Orbison’s ‘Black & White Night’, which has an incredible line-up on stage of fantastic musicians, including one of my favourite guitarists – James Burton playing alongside Bruce Springsteen. To think K D Lang was on backing vocals! I played the concert many times during the time it has taken me to record this tribute CD. The album kicks off with ‘Only The Lonely’ which is the title track. This song was Roy’s first major hit and reached number one in the UK charts on 20 October 1960. The song had 24 weeks in the charts and 2 of those weeks were at the top. An extended version of ‘Dream Baby’ in a ‘Black and White Night’ made this song a ‘Must Do’ for me, but I have stuck to the original recording.
There are so many very emotional sad songs that I have covered. This next selection are so powerful – Don Gibson’s ‘Too Soon To Know’, ‘Walk On’ and ‘It’s Over’ written by Roy Orbison and Bill Dees, ‘Careless Heart’, and of course ‘Crying’ written by Roy Orbison and Joe Melson and released in 1961. For dramatic effect I think ’Running Scared’ says it all. Released in 1961 and is noted for being a song without a chorus. All the excitement is there as Roy climbs through the octaves with apparent ease to reach the climax of the song right at the top of his vocal register. One song here that Roy covered so well was Don Gibson’s ‘A Legend In My Time’. It has always been a favourite of mine and I had to include it on this album. The two really slow songs –Stephen Foster’s ‘Beautiful Dreamer’ and Roy Orbison and Jeff Lynne’s ‘A Love So Beautiful’ I found were incredibly moving to record. To up the tempo a bit I just had to do ‘You Got It’. It has a wonderful rhythm guitar part to it. It is worth noting that this was Roy’s last UK hit record. Both Jeff Lynne and Tom Petty not only wrote this song with Roy, but played their instruments on this record. In addition, both Jeff Lynne and Tom Petty wrote ‘California Blue’ with Roy, which also came from Roy’s ‘Mystery Girl’ album. Roy Orbison was of course part of the famous super group – The Traveling Wilburys. In 1961, ‘Love Hurts’ was released as the ‘B’ side to ‘Running Scared’, which went on to give ‘Nazareth’ a hit song.
To conclude – it just had to be ‘Oh ! Pretty Woman’. The opening riff is so recognisable. This was Roy’s third song to top the charts, following ‘Only The Lonely’ and ‘It’s Over’. The year was 1964 and it stayed at the top for three weeks. This song also inspired the 1990 feature film ‘Pretty Woman’ starring Richard Gere and Julia Roberts.
I do hope you enjoy my selection of tracks, there were many more to choose from, but here are my favourite 16 songs from ‘The big ‘O’. I dedicate this album to the one and only Roy Orbison. Roy Orbison died at the age of 52 in 1988.
As always, I also like to add some bonus tracks. There are six on this CD. No apparent reason for any of them, except my personal choice. I just loved Paul Carrack’s version of the Goffin & King song ‘When My Little Girl Is Smiling’. A really good track to drive along to. Its unusual for me to do a cover of a cover, but he did it so well, and not long ago either. ‘Walk Right Back’ a great Everly Brothers song which I have always enjoyed. I dedicate ‘Some People’ to the memory of Jet Harris. Rod Stewart’s ‘I Don’t Want Talk About It’ always went down well at gigs I have done in the past, so I thought it is time I recorded it. I have include Kenny Ball’s ‘So Do I’ as a tribute to the great jazzman we have recently lost. You can’t help tapping your feet when this song comes on. And finally, ‘Mrs Brown You’ve Got A Lovely Daughter’ from Herman’s Hermits. As soon as you hear the opening sequence, this song can’t be anything else.
So there you have it, that completes my 22 track selection for this CD.
© Peter Williams 2013