Especially for You Vol. 1 - From The Vaults : Peter Williams - My Voice is My Guitar

Especially for You Vol. 1 - From The Vaults : Peter Williams - My Voice is My Guitar 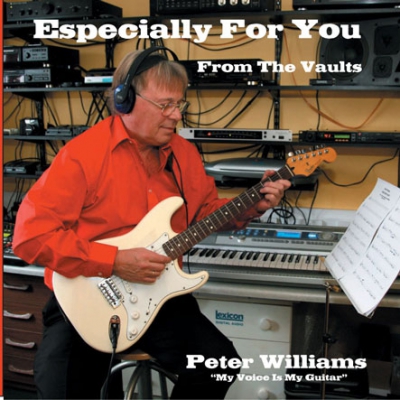 Especially for You Vol. 1 - From The Vaults

‘Especially For You – From The Vaults’
Liner Notes by James F. Cullinan (Finbarr International)

Music is an integral part of my life, both personally and professionally. My business is selling compact discs by mail, specializing in the music of the Fifties and the Sixties. I care passionately about this music, for it was not only the background to my youth but also the centre of it; and I care that it thrives and that it is not forgotten.

All our sales are in back catalogue ‘name’ acts. Attempts to introduce unknown names from the era usually fail, for people only want what they know. To try and introduce unknown contemporary acts, even though they may perform Fifties’ and Sixties’ music with the same conviction as anyone of the era, is financial suicide. I have lost thousands of pounds in promoting through my catalogue acts in whom I believed in passionately. Yet contemporary acts approach me constantly, feeling that to get their album listed in my catalogue will help their profile, but the sales are never forthcoming.

Peter Williams approached me on the recommendation of Spencer Leigh whose biography of Billy Fury, "Wondrous Face" I had just published. I received his two Fury tribute albums and was spellbound – indeed almost moved to tears! For here was an artiste of unequalled sensitivity and power who understood the Fury magic. I gave the albums a rave write-up in my catalogue, which normally would make no difference, for when people’s minds are closed there is nothing one can do; but this time I was wrong, and was pleasantly surprised when the first of the two tributes turned up at No. 14 in our in-house sales chart! In my experience this was almost unheard of for an unknown act. It was a double surprise, for ‘tribute’ projects are usually anathema in my market. More gratifying still was the interest in Williams’ other albums which I began carrying.

So what is so special about Peter Williams? At the risk of sounding conceited he MUST be special for me to be impressed. I am hard to please and I find most contemporary recordings of Fifties’ and Sixties’ styles wanting. Often they are technically perfect, yet leave one cold. Hearing Williams for the first time in 2005 was for me the single most exciting musical discovery of the new decade. And if he or Hank Marvin entered the room and I had the choice of only shaking hands with one I would unhesitatingly move towards Williams. But of course without Hank Marvin there would probably not be someone like Peter Williams, but that said he is no Marvin clone. On the contrary, Williams is very much his own man. He possesses an indefinable ‘X’ factor, an emotional charge which I find in no comparable guitarist. He communicates a rare sensitivity and warmth which no amount of technical proficiency can inculcate.

The present disc was never intended for public hearing, it consisting of recordings which did not fit in with Williams’ album projects. But those who have heard them have convinced the guitarist that they should be released. Here is lovely music which should not remain hidden and unheard. It is typical of his ‘proper’ albums in that it is hard to pick tracks which stand out for the material and performance are consistently of a high calibre. Doubtless each listener will have his own favourites. The disc’s strength lies in its power to grow on the listener. Having already listened to it some nine or ten times I still find it growing on me, and am amazed to find certain tracks which did not strike me at first now going around and around in my head!

If there is one track I would single out for attention it is the one dedicated to Steve Etherington – Williams’ Manager, MOONLIGHT SHADOW. Though never intended for commercial release any deejay with a modicum of imagination should play this track, not once… but again and again. I doubt if anyone exposed to its hypnotic and irresistible melody would not want to seek this CD for this one track alone. Why are deejays so reluctant to believe in a record and play it again and again? Are they – or their employers – terrified that they might – gasp! – create a hit? In 1959 Santo & Johnny’s instrumental masterpiece SLEEPWALK was a complete flop. It was not played, nobody wanted it, nobody cared. It was a flop along with the hundreds of other records competing in the market at the same time. Then somehow Alan Freed, a man never afraid to believe in a record, got hold of it. He loved it and wouldn’t stop playing it. It became the biggest selling instrumental of the year. Perhaps in today’s rigid environment there is no scope for jockeys to believe in what they play, but why not? If I had a radio show with the freedom to play what I wanted I would play MOONLIGHT SHADOW week in week out. Listener indifference would turn to attention, and attention would turn into action. THE POINT OF THIS CD BEING AVAILABLE IS THAT IT SHOULD SELL.

Another charming tune, and after Peter Williams I cannot listen to any other version, is THEME FROM THE BOYS. ANNIE’S SONG is a lovely song in anybody’s hands, but Williams’ version is so tender that it almost hurts.

Haunting and magical is his rendition of HAVE YOU EVER SEEN THE RAIN, and WHEN THE GIRL IN YOUR ARMS compliments the original with its beauty and simplicity. CRYIN’ IN THE RAIN and ALL I HAVE TO DO IS DREAM sound better all the time; and our man’s jaunty treatments of songs associated with Sammy Turner and Tommy Bruce, Paul Anka, Rick Nelson and Clarence Henry are great fun.

He wonders how at age 59 he can still make it. I tell him that one of my best selling authors (I also publish books on mysticism) got his first book published at age 78, and then wrote a number of best sellers for me over the following 20 years!

I have every reason to believe that Peter Williams’ future is bright.

Special thanks go to James F. Cullinan for writing the Liner Notes for this album. I was very touched when I received them, and I thank him dearly. I would like to thank Deano for creating the backing tracks for me to use on this album. He is a really gifted musician, and is able to re-create the music I need perfectly.  Ronnie and his team at CME Duplication in Glasgow, for mastering and producing my CD. The encouragement to release these tracks from my Manager – Steve Etherington. Chris Eley from The Sound Of Fury Fan Club who always listens to my tracks to give his approval. He has been a great help in the past in helping to market both of my Billy Fury tribute CDs. Harry Whitehouse on the Billy Fury web site and the people on his infamous Message Board. David Hemmings for the photography, Dell Richardson and his Good Rockin’ Tonight show on Tuesday evenings on the wonderful Radio Caroline. The local BBC Radio Presenters for playing my stuff – Big George Webley, Stephen Foster, Bernie Keith, Spencer Leigh, Billy Butler, John Holmes, Susan Marchant, John Randall, Julie Mayer, John Pilgrim, & Mike Barry at CRMK Radio.

A special thanks to my mentor, Mr Bert Weedon (who taught me to play the guitar) and his lovely wife Maggie. Two very special people. Finally, special thanks to all my family, and friends in the Conservative Club in Stony Stratford.

I often get asked what do I call my guitar? Well, it gets called many things when recordings go wrong as you can imagine. But, if I have to have a name for my axe then let it be called ‘The Stallion’ from this day forth. It has now recorded 5 CD’s apart from around 500 ‘Live’ gigs, and is still going strong. It is my wonderful white Mexican Fender Stratocaster. I wouldn’t change this guitar for anything in the world.

I am often asked what gear I use to record my instrumental CD’s.

I record using a specially programmed Zoom 508 into an Ibanez VA3 Virtual Amp into a Yamaha AW16G professional Audio Workstation. The final mix is sent to an Alesis 3630 Compressor/ Limiter/ Noise Gate and then mastered onto Mini Disk and through optically to a Pioneer CDR.